Punch Hard is our upcoming Boxing VR-game! Battle against several opponents including a Nordic Viking, a Clown or a Robot in this arcade-style action packed experience.

This game is planned to be released on the Oculus Quest and that means full freedom to move around in the ring and no cords in the way of your punches.

Some of the features include: 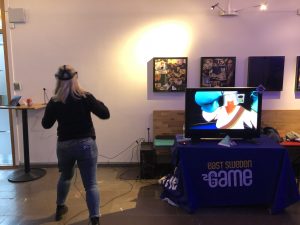 With a planned release by the end of 2019 we actually premiered an early beta on LiU Games Conference on the 28 of November and the response was super positive! “Great feeling”, “this is unbelievable” and “I love it” was just some of the comments we got from players trying it out.

So, if you love boxing make sure to check out Punch Hard! Expect more news and character revelations in the months to come.